President Biden is sending a bill to Congress on day one to “restore humanity and American values to our immigration system” per the press release.

Some highlights of the bill are set forth below. Exactly how these provisions will be implemented is not yet known.

Create an earned roadmap to citizenship for undocumented individuals. The bill allows undocumented individuals to apply for temporary legal status, with the ability to apply for green cards after five years if they pass criminal and national security background checks and pay their taxes. Dreamers, TPS holders, and immigrant farmworkers who meet specific requirements are eligible for green cards immediately under the legislation. After three years, all green card holders who pass additional background checks and demonstrate knowledge of English and U.S. civics can apply to become citizens. Applicants must be physically present in the United States on or before January 1, 2021. The Secretary of the Department of Homeland Security (DHS) may waive the presence requirement for those deported on or after January 20, 2017 who were physically present for at least three years prior to removal for family unity and other humanitarian purposes.

Lastly, the bill further recognizes America as a nation of immigrants by changing the word “alien” to “noncitizen” in our immigration laws.

Keep families together. The bill reforms the family-based immigration system by clearing backlogs, recapturing unused visas, eliminating lengthy wait times, and increasing per-country visa caps.  It also eliminates the so-called “3 and 10-year bars,” and other provisions that keep families apart. The bill further supports families by more explicitly including permanent partnerships and eliminating discrimination facing LGBTQ+ families. It also provides protections for orphans, widows, children, and Filipino veterans who fought alongside the United States in World War II. Lastly, the bill allows immigrants with approved family-sponsorship petitions to join family in the United States on a temporary basis while they wait for green cards to become available.

The bill provides dependents of H-1B visa holders work authorization, and children are prevented from “aging out” of the system.

“Incentivizes higher wages for non-immigrant, high-skilled visas” is concerning, as DOL just issued a final rule that increases prevailing wages and DHS issued a rule on a wage-based H-1B CAP lottery selection process. The Biden-Harris Administration is planning to issue a regulatory freeze on Trump’s “midnight regulations” that he issued in his final days, which should include these new H-1B rules. We will closely monitor actions and updates.

U.S. Citizenship and Immigration Services announced on November 13, 2020 plans to implement a revised version of the naturalization civics test. The agency first announced plans to revise the civics test in July 2019.

“USCIS has diligently worked on revising the naturalization test since 2018, relying on input from experts in the field of adult education to ensure that this process is fair and transparent,” said USCIS Deputy Director for Policy Joseph Edlow. “Naturalization allows immigrants to become fully vested members of American society, with the same rights and responsibilities as citizens by birth, and offering a fair test, which prepares naturalization applicants for these responsibilities, is of upmost importance to our agency.”

The revised test includes more questions that test the applicant’s understanding of U.S. history and civics, in line with the statutory requirements, and covers a variety of topics that provide the applicant with more opportunities to learn about the United States as part of the test preparation process. The revised test will not change the passing score, which will remain at 60%. Candidates must answer 12 questions correctly, out of 20 in order to pass.

USCIS will maintain the current guidelines for statutorily established special considerations for applicants who are 65 years old or older and have at least 20 years of lawful permanent resident status. These applicants will be asked 10 questions and must answer a minimum of six questions correctly in order to pass.

Finding the best immigration lawyer in Fort Worth seems like a big task – but you can use these tips to narrow your search and zero in on the right attorney for your needs.

Whether you’re trying to get a visa to come to the U.S., you want to help your family immigrate, or you’re ready to sponsor workers from outside the country, you need an immigration lawyer in Fort Worth who can answer all your questions, file the appropriate paperwork with the right agencies, and make the entire process as smooth as possible. Use these tips to find an attorney who can get you the best possible outcome:

First things first: you need to make sure you’re dealing with an attorney, not someone billing him- or herself as a visa consultant, petition preparer or notario. These people are not attorneys and can’t give you legal advice. Worse, they may not even know what they’re doing.

When you are dealing with an immigration attorney in Fort Worth, he or she can only tell you the truth – and no attorney can ever guarantee you a certain outcome. Your case’s fate is in USCIS’s, Homeland Security’s, or an immigration judge’s hands… not your lawyer’s. 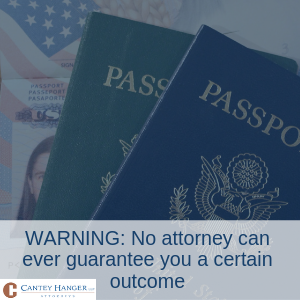 Pro tip: Always watch out for lawyers who tell you to lie on an application or in an interview, or who ask you for money to bribe officials. If you encounter an attorney like this, run. Doing these things can get you into heaps of trouble, and you may even be barred from entering the United States in the future as a result.

United States law can be complicated (have you seen the Immigration and Nationality Act?), so for most people, it makes sense to work with an experienced Fort Worth immigration attorney. That’s not to say that working with a new lawyer is bad – it’s only to say that lawyers who have filled out hundreds of immigration forms know what to look for, how to help prepare their clients for interviews, and understands what kinds of issues can trip up an application and drag out the process.

One of the most important things you can do when you’re looking for the best immigration lawyer for your needs is to conduct an interview. You can set something up at the attorney’s office or you can conduct an over-the-phone interview – but you definitely have to do it. This way, you can get a good feel for how the lawyer communicates, ask all your questions and see whether you “click.”

Do You Need to Talk to an Immigration Lawyer in Fort Worth?

If you’re considering immigrating to the U.S. or you want to sponsor foreign workers, we may be able to help you. Call 817-529-4509 to schedule a consultation with an experienced, knowledgeable attorney today.

Our primary focus is on serving the legal needs of internationally focused companies and financial institutions. Our clients include the majority of Fortune 100 companies.