He hopes to resume estimates of coming visa availability in the October or November Visa Bulletin.

If you are applying for adjustment of status to that of a lawful permanent resident with USCIS (also known as applying for a Green Card), please file Form I-693, Report of Medical Examination and Vaccination Record, together with Form I-485, Application to Register Permanent Residence or Adjust Status. Doing so may eliminate the need for us to issue a Request for Evidence (RFE) and helps avoid adjudication delays.

Due to the COVID-19 pandemic and related processing delays, USCIS has experienced delays in all aspects of operations. Applicants have also experienced difficulties beyond their control, including delays with completing the immigration medical examination.  To address these issues, USCIS is temporarily extending the validity period of an otherwise valid Form I-693.

Effective Aug. 12, 2021, USCIS is temporarily extending the validity period for Form I-693 from 2 years to now 4 years. For decisions on Form I-485 issued on or before Sept. 30, 2021, the adjudicating officer may accept an otherwise valid Form I-693, if no more than four years have passed since the civil surgeon’s signature. The officer may accept for consideration a Form I-693 for a decision issued on or before Sept. 30, 2021 if:

USCIS began notifying registrants of cap selection on Saturday, March 27, 2021. The American Immigration Lawyers Association (AILA) has asked USCIS to confirm if USCIS has completed its first round of notifications.  Although USCIS did not confirm either way, USCIS did inform AILA that the agency plans to send out formal communications to inform the public regarding if and when the selection period has closed and that stakeholders should see communications regarding this update from USCIS in the coming days.

Registrants’ online accounts will now show one of the following statuses for each registration (that is, for each beneficiary registered):

USCIS just announced that it will delay implementing a wage-based selection process until next year. For the upcoming H-1B cap season, USCIS will apply the current random selection process to any registration period that takes place before Dec. 31, 2021. This is very welcome news.

Forbes has posted a great article explaining the status of Trump’s H-1B rules under the Biden administration.

“During its four years, the Trump administration inflicted most of its immigration damage on businesses and high-skilled foreign nationals through memos, executive orders and proclamations. Near the end, Trump officials published two regulations to restrict H-1B visas and prepared a third rule for publication. Businesses, universities and H-1B professionals now wonder what the start of the Biden administration means for the fate of these three Trump-era H-1B rules.

One indication as to the fate of these rules came on Joe Biden’s first day. A January 20, 2021, memorandum sent by White House Chief of Staff Ronald A. Klain asked executive departments and federal agencies to postpone rules for 60 days that ‘have been published in the Federal Register . . . but not taken effect.’ The memorandum adds: ‘For rules postponed in this manner, during the 60-day period . . . consider opening a 30-day comment period to allow interested parties to provide comments about issues of fact, law, and policy raised by those rules, and consider pending petitions for reconsideration involving such rules. As appropriate and consistent with applicable law, and where necessary to continue to review these questions of fact, law, and policy, consider further delaying, or publishing for notice and comment proposed rules further delaying, such rules beyond the 60-day period.’

President Biden is sending a bill to Congress on day one to “restore humanity and American values to our immigration system” per the press release.

Some highlights of the bill are set forth below. Exactly how these provisions will be implemented is not yet known.

Create an earned roadmap to citizenship for undocumented individuals. The bill allows undocumented individuals to apply for temporary legal status, with the ability to apply for green cards after five years if they pass criminal and national security background checks and pay their taxes. Dreamers, TPS holders, and immigrant farmworkers who meet specific requirements are eligible for green cards immediately under the legislation. After three years, all green card holders who pass additional background checks and demonstrate knowledge of English and U.S. civics can apply to become citizens. Applicants must be physically present in the United States on or before January 1, 2021. The Secretary of the Department of Homeland Security (DHS) may waive the presence requirement for those deported on or after January 20, 2017 who were physically present for at least three years prior to removal for family unity and other humanitarian purposes.

Lastly, the bill further recognizes America as a nation of immigrants by changing the word “alien” to “noncitizen” in our immigration laws.

Keep families together. The bill reforms the family-based immigration system by clearing backlogs, recapturing unused visas, eliminating lengthy wait times, and increasing per-country visa caps.  It also eliminates the so-called “3 and 10-year bars,” and other provisions that keep families apart. The bill further supports families by more explicitly including permanent partnerships and eliminating discrimination facing LGBTQ+ families. It also provides protections for orphans, widows, children, and Filipino veterans who fought alongside the United States in World War II. Lastly, the bill allows immigrants with approved family-sponsorship petitions to join family in the United States on a temporary basis while they wait for green cards to become available.

The bill provides dependents of H-1B visa holders work authorization, and children are prevented from “aging out” of the system.

“Incentivizes higher wages for non-immigrant, high-skilled visas” is concerning, as DOL just issued a final rule that increases prevailing wages and DHS issued a rule on a wage-based H-1B CAP lottery selection process. The Biden-Harris Administration is planning to issue a regulatory freeze on Trump’s “midnight regulations” that he issued in his final days, which should include these new H-1B rules. We will closely monitor actions and updates.

The interim final rule by the Department of Labor increasing H-1B and labor certification wages which went into effect on October 8, 2020 AND the Interim Final Rule significantly changing the standards for H-1B “specialty occupation” which was to take effect on December 7, 2020 have been set aside by the U.S District Court, Northern District of California, in the matter of Chamber of Commerce v. DHS. This could not be more welcome news!

DOL will now have to revert its wage database back to reflect the wages prior to the implementation of the wage hike rule. At this time, it is not known if DOL/DHS will appeal the court’s decision.  The judgment applies universally and not just to the parties to the litigation.

USCIS did not receive enough H-1B petitions in the first round of the lottery to reach the cap, so it is conducting a 2nd lottery selection this week. Employers will have a 90 day period within which to file the H-1B petitions that are selected this week. Check your USCIS online account to see if your registration account has changed from “submitted” to “selected.” 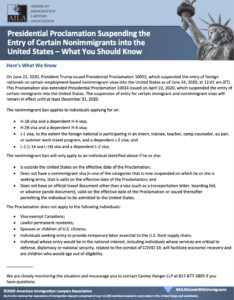 Our primary focus is on serving the legal needs of internationally focused companies and financial institutions. Our clients include the majority of Fortune 100 companies.